PATENTED RE-FLOW TECHNOLOGY US9424819B1
LIKE NO OTHER STRING YOU HAVE EVER TRIED
Black Diamond VT Series with Core-Bond have wonderful clarity and tone. Sustain and volume is fantastic and will hold its tune in perfect pitch, settling in fast, long lasting tone.
WE HAVE CHANGED THE GAME FROM THE INSIDE OUT AGAINST PREMATURE LOSS OF YOUR TONE! 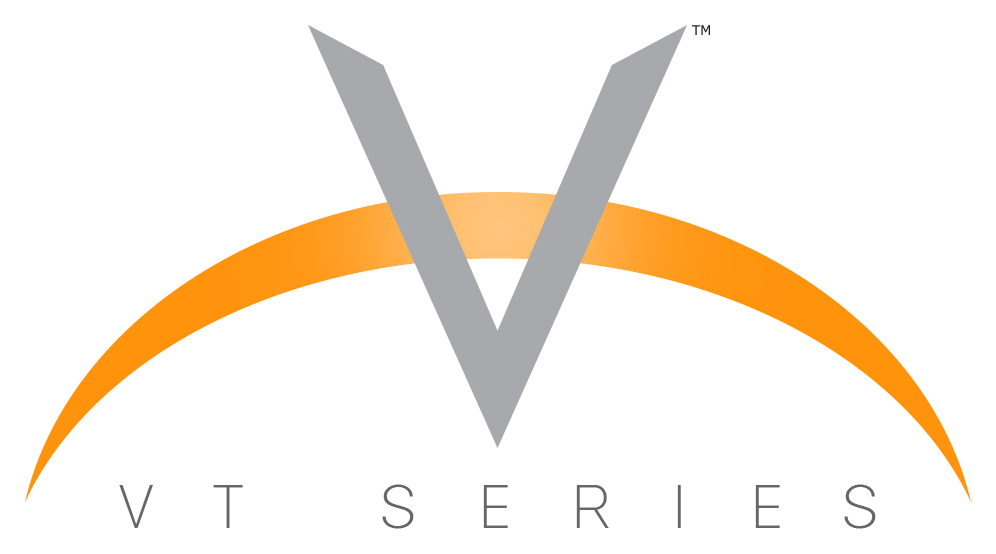 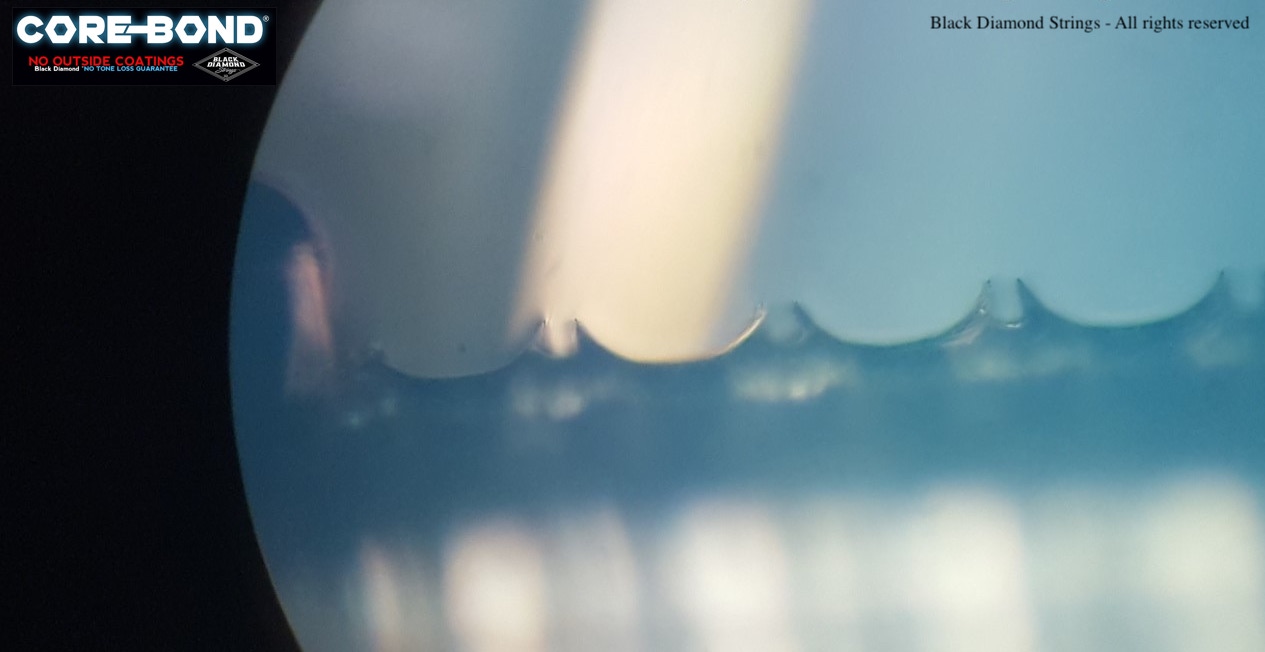 BETA TESTER SAY
"Until now, I thought the strings I used were the best strings ever made but quite honestly Core-Bond  strings are even better. They still felt like new and had no discernible loss of tone. I seriously rank them at 10+ and when they become available they will be my string of choice for sure! Whoever designed these strings is a GOD!"- Mark Knapp plays national shows all over the United States.
"I have a tuner on my guitar, I randomly would return to alternate tuning and back. The strings were tuned to 12 different tunings several times. Always settled in tune and held regardless of the shifting around. I've had over 2 months of play on them and don't want to take them off until they break. They sound fantastic" Michael Carr plays a Gibson Les Paul and Ovation Balladeer.
"The strings are great, especially the strong tone through the guitar pickups. The strings have been on my guitar from Oct 2017 to March 2018. 5 Months and they still hold their tone with no corrosion or loss of tone." Terry Lauderdale tours with a Charvel Pro-Mod San Dimas.

WHAT CAUSES A STRING TO LOSE IT'S TONE?

Tone loss is when the wrap and core coupling is compromised either through mechanical degradation from the vibration of the string or galvanic corrosion due to the dissimilar metals used in the manufacturing. Core-Bond ™️ addresses this issue by effectively "locking" the relationship of the core and wrap wire as "one".

The buildup of dirt, skin cells and acidic content in your hands get down between the windings and effectively dampens string tone as well as starts the corrosion process of the core wire. The string isn't mechanically dead, however, the tone is compromised until the strings are cleaned which can be a difficult process to complete. Some string companies coat the wrap wire and sometimes coat the whole string to address this issue. However, a string with an outside coating may also dampen the true tone of the string as well as eventually frey off from normal playing. Coated strings will not prevent galvanic corrosion.

Example of leading brand of coated strings once the outer coating is breached, corrosion accelerates

With a coated wrap wire or even a completely coated string, your guitar pick, as well as your frets, act like a file and eat into the coating which then exposes the wrap and core wire to corrosive elements. In addition, covers and coatings may dampen tone as well as string output.  In most cases, many recording artists may use uncoated strings in recording sessions to maximize the full tone potential of the strings and the guitar, but opt for a coated string on stage due to touring and climate changes. A guitar tech for a touring artist will purchase dozens of sets for the tour. It is not uncommon for a tech to change strings at every location stop, the main reason is to assure the artist has a fresh set on the guitar. However, with Core-Bond ™️  Technology, which is uncoated on the outside, they will not frey, will retain its tone longer, eliminate galvanic corrosion and increase the integrity of the string for a very long time. In some cases, our beta testers claimed that the wound strings lasted up to 1 year with no tone loss. Although it is uncommon for a guitarist to have a string on for a year, this was one beta testers result.

WHAT IS GALVANIC CORROSION?

Galvanic corrosion (also called bimetallic corrosion), is an electrochemical process in which one metal corrodes preferentially when it is in contact with another in the presence of an electrolyte. Galvanic corrosion in a wound string starts immediately after it is manufactured and even more so as it's transported and stored. The difference in the core and the wrap metal alloy causes galvanic corrosion to occur. The same is said for the acidic content in a player's hands which seeps between the winding onto the core wire causing the core to corrode onto the wrap wire from the inside out. With Core-Bond ™️  this does not happen. Some discoloration on the outside of a string is normal over time, however, Core-Bond ™️  Technology dramatically reduces the chance of loss of tone due to the breakdown of the core to wrap coupling. A string that may start to look bad due to tarnishing, does not necessarily mean the string is bad. It is the core to wrap coupling breakdown that is the cause for tone loss and ultimately a dead string. A brand new string can also be a dead string if the manufacturer's core to wrap ratio and coupling was not made correctly from the beginning. With Core-Bond ™️ it is virtually impossible to manufacture a new dead string due to our bonding activation process. So you can be assured each and every set of strings has the integrity you need and want.

IF I CLEAN MY STRINGS AFTER EACH PLAY, DOES THIS SOLVE THE CORROSION PROBLEM?

No, it does not. Moisture in the air, as well as elevated temperature changes and the acidic content in your hands, attack the strings integrity. When a guitar is transported in a guitar case, there would be no way to eliminate these threats unless the guitar is in a constantly humidity controlled environment every day.

As a wound string is tuned to key, the core wire stretches and thins slightly, while the wrap wire does not. For this reason, most string manufacturers spin the wrap around the core under core tensions similar to pitch. As the string vibrates during use, the core wire can also thin slightly, allowing movement of the outside wrap wire to slip, which over time, will cause the coupling to become compromised and therefore the string effectively starts going dead. Corrosion over time has the same effect. The Core-Bond ™️ process ensures the integrity of the coupling over a much longer period of time, if not for an unprecedented period of time by "bonding" the relationship of the wrap wire to the core wire.

Stabilization of tuning, the strength of the string and the loosening at the twist ending by the ball are all obstacles that need to be addressed and eliminated when manufacturing a wound string.  It is virtually impossible for the ball at the end of a Core-Bond ™️ wound string to unravel.  The twist lock at the ball on the wound strings become "BONDED" together once the final activation process has completed.

We start out with U.S.A. high-grade metal alloy. The assembly of the string begins with the application of core wire placement and pulled to a specific tension. The outer winding material is then applied by Black Diamonds most advanced string winders in the industry. Named the BD6900, these winders are one-off specialized made machines built by Black Diamond.  The BD6900 assists Black Diamond production operators to produce with precision, a Core-Bond ™️ string every 20 seconds resulting in an unparalleled and consistent product.  The BD6900 winder's computer-controlled technology allows production operators to input and monitor pull tension, speed, braking, and pitch angle to name a few of the variables available to the operator. The objective is to achieve our proprietary calculations for core-to-wrap coupling. This completes the first phase of a Core-Bond ™️  strings.  Phase-two is the most important process. The Core-Bond ™️ activation phase is to submerge the string in our proprietary treatment bath that activates the inner bonding and "bonds" the core to the wrap wire. The result is longer life,  lasting tone, more strength, projection, and output. These are the highest attributes that most guitar players are looking for in a great string.

WE HAVE CHANGED THE GAME FROM THE INSIDE OUT

We took a very extreme approach to our testing. By submerging Core-Bond ™️ treated strings in a 5% Saline bath to replicate ocean water, the image below shows results after 96 hours. Keeping in mind,  Core-Bond ™️ strings DO NOT have an outer coating to protect the strings.  The result is amazing.  Now, we realize a player is not going to put their string in ocean water, but this does validate the protection characteristics of Core-Bond ™️

The strings were clipped at each end to show the acceleration of corrosion at the ends of the exposed steel plated core wire.  Notice seepage of corroded core coming through the center of the coated string on the right, compared to the non outer coated Core-Bond ™️ treated string left . 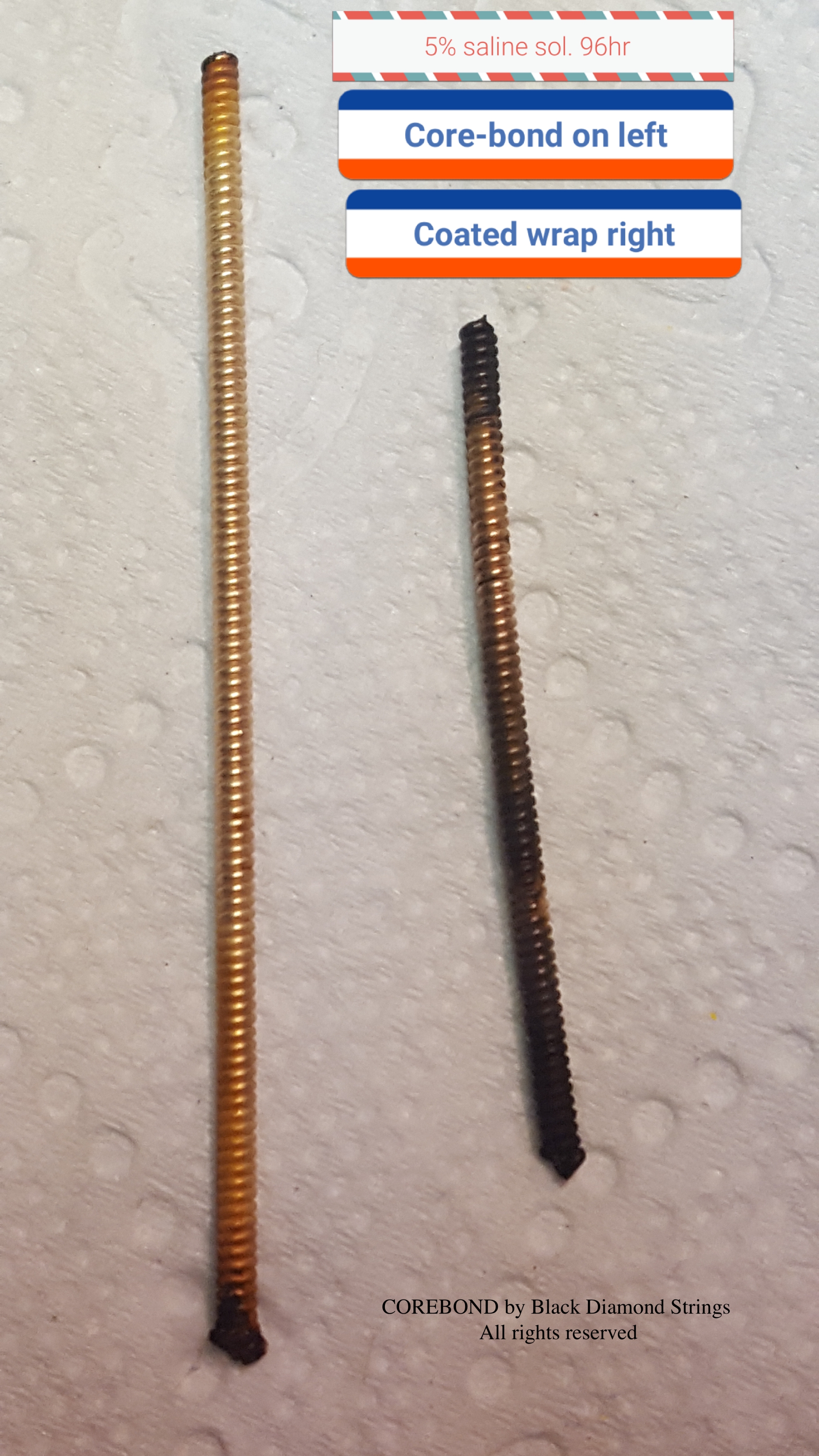 Plated Hexcore seen below, is a widely used core wire and one of the best wires to use when trying to achieve the perfect wrap to core bond. However, wrap slippage when tuning /de-tuning along with the degradation of the core through galvanic corrosion caused by the acidic content and dirt in your hands will attribute to sooner than later tone loss.  Steel core wire can rust if it is not plated. Almost every string manufacturer in the industry uses a plated core wire. However, a plated core only helps in the very short term. Anytime dissimilar metals and electrolytes are present without protection, galvanic action will occur. A core that is plated, does not give protection against wrap to core separation due to corrosion which starts from the inside out and subjects the string to premature tone loss and in some cases a dead string. Note that the plating is already compromised from the wrap wire crushing the points thus causing the plating to fail. Core-Bond ™️  prevents this from happening. 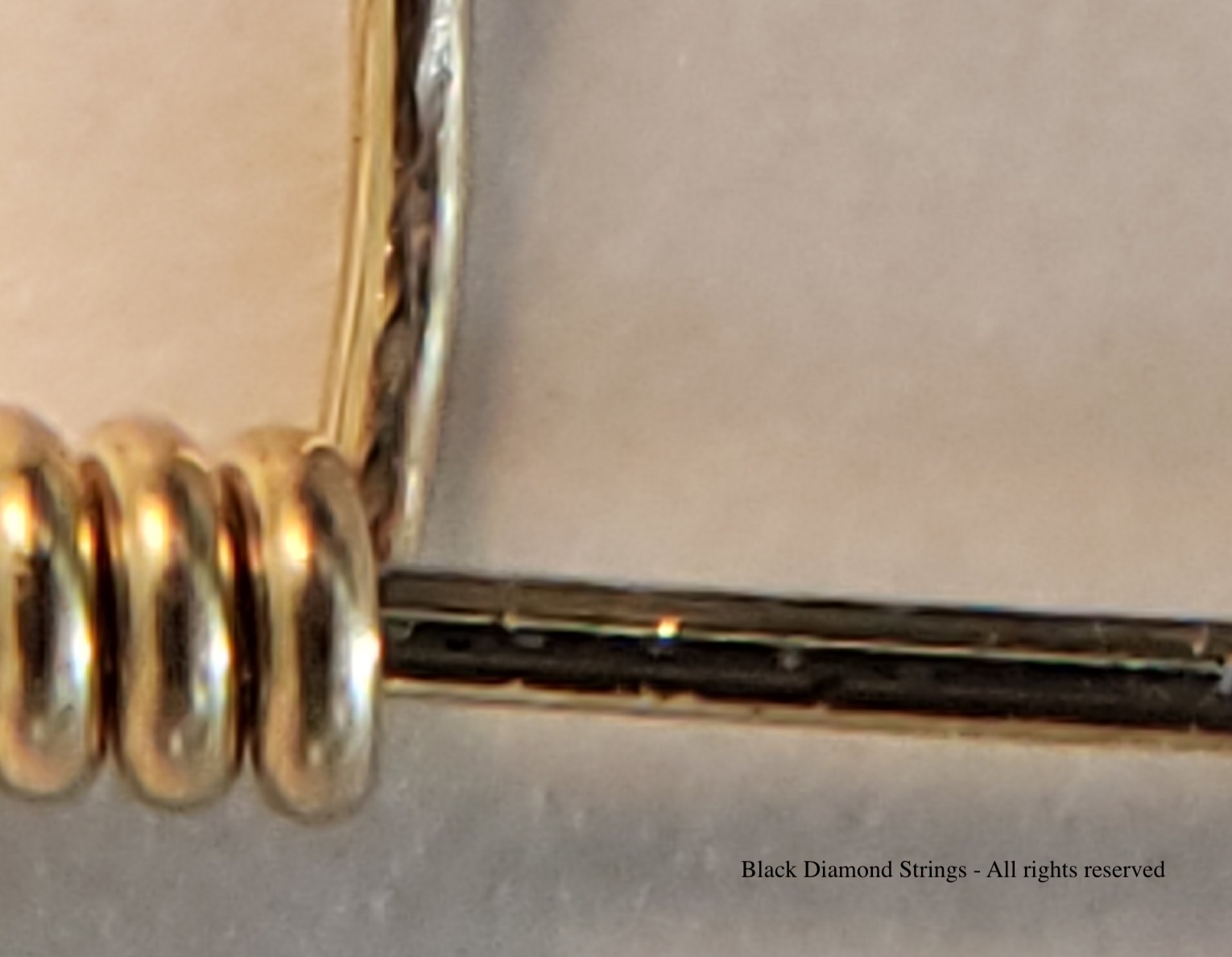 Above - Natural core without Core-Bond ™️

Magnification image below shows a Black Diamond's high carbon steel core and the valleys Core-Bond ™️ create. Our secondary Upflow process Reflows and UpFlows to locks in the wrap wire. With the wrap wire disassembled from the core, the valleys remain.  The core wire is surrounded and protected by Core-Bond ™️ . The Tips of the valleys you see show how Core-Bond ™️ , our Secondary Stage Upflow Submersion process allows the Core-Bond ™️ to up-flow into the wrap wire spaces and secures the wrap to core bonding we need to achieve.

Below - Competitors less than robust attempt at core to wrap bonding. 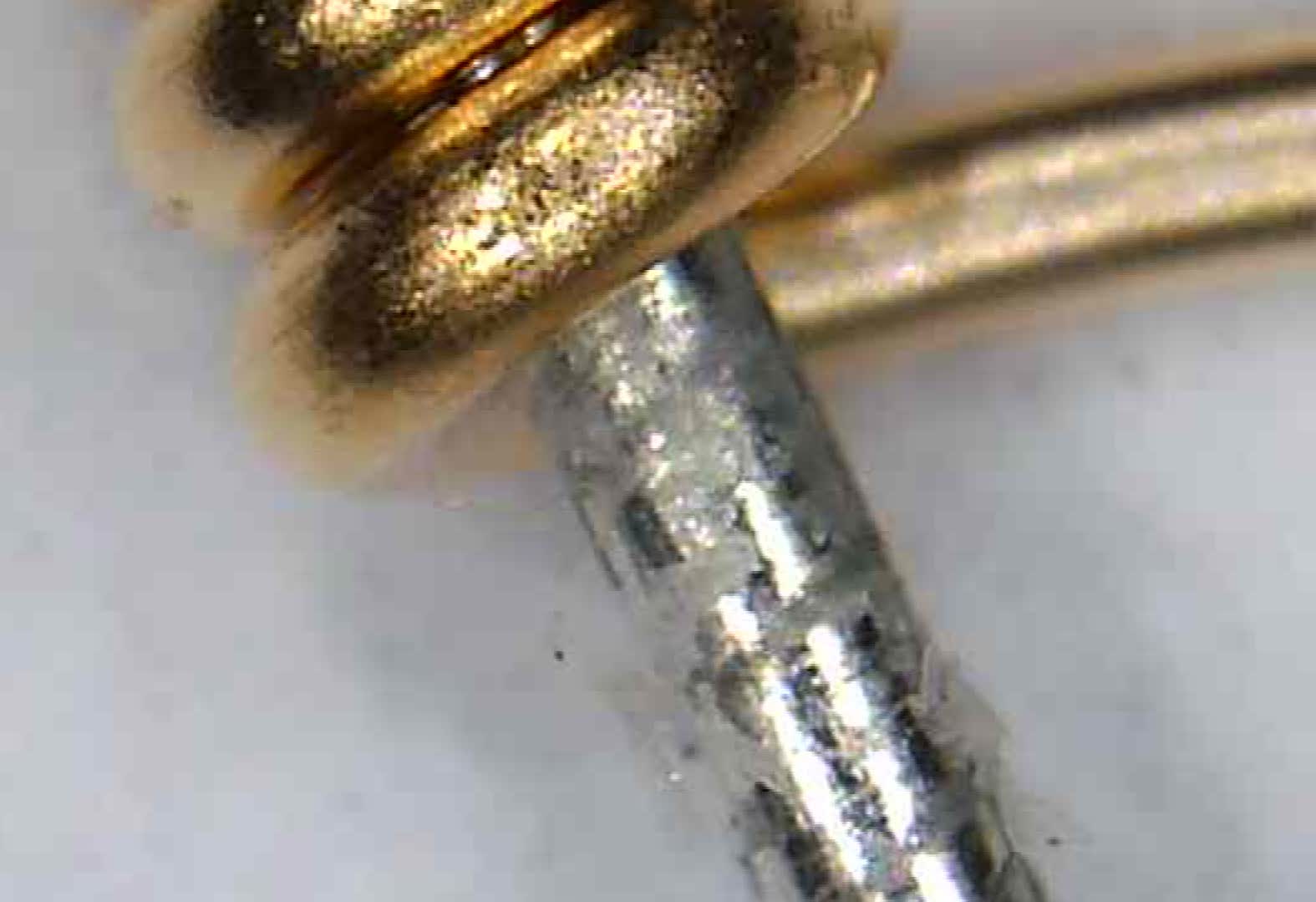 We understand strings are subjective from player to player, and players have their own view on when they feel strings have run their course. However, we at Black Diamond Strings are so confident in our Core-Bond ™️ product, we know you will enjoy them. If you feel your strings have lost their tone within the first 60 days of purchase, we will honor a replacement when a qualifying claim is presented to us.

The first production batch goes to the user in a mass consumer beta test. Your feedback may be posted on our website. Inquire today and get on our first run beta test list.  We have already communicated with key retailers and distributors who have already placed orders and will stock the strings for consumer purchases soon. 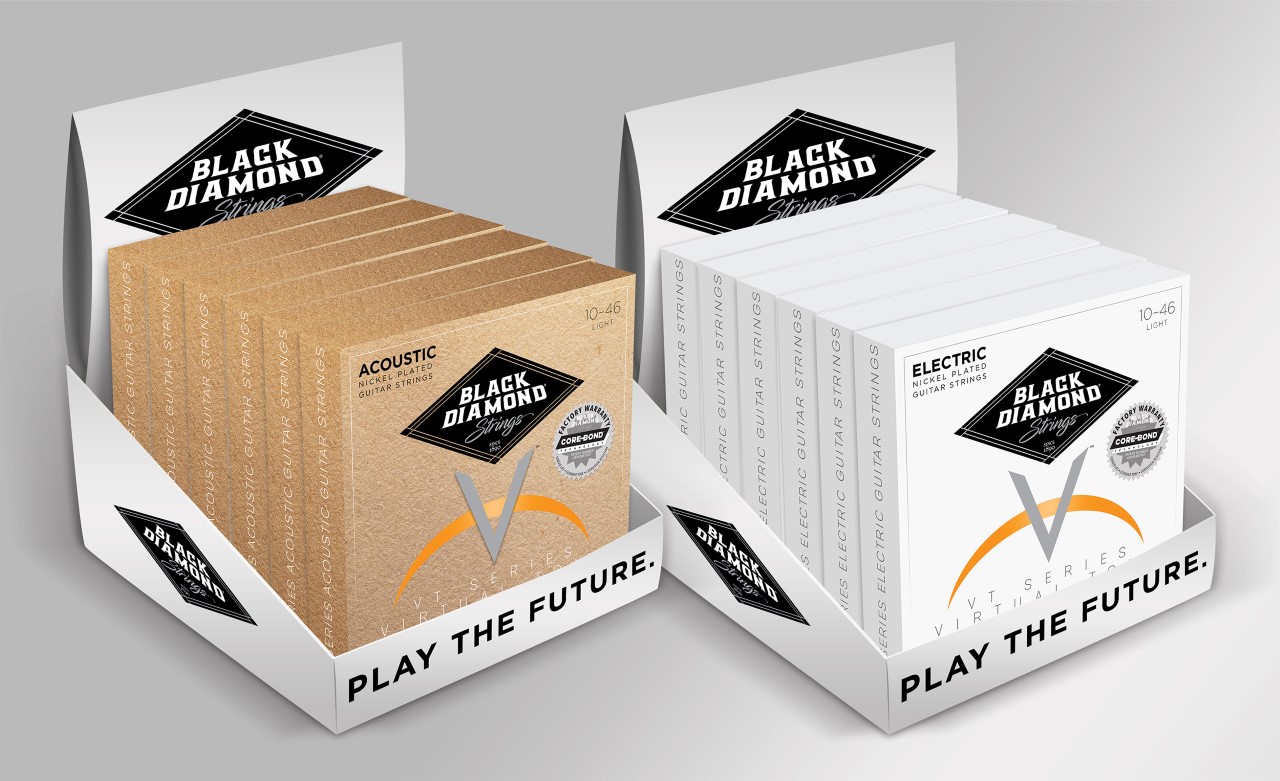 COPYRIGHT 2018 - Core-Bond ™️ by Sfarzo Guitar String Company LLC - IMAGES AND WRITTEN CONTENT USE ON THIS WEBSITE MAY NOT BE REPRODUCED WITHOUT WRITTEN PERMISSION AND CONSENT - CONTACT: INFO@SFARZOUS FOR GRANTED PERMISSION

There are no products listed under this category.