The String That Started It All ™

BEFORE THERE WERE ADS AND ENDORSERS, BEFORE PLAYING GUITAR BECAME A FASHION, A YOUNG MAN NAMED JIMI PLAYED BLACK DIAMOND STRINGS! 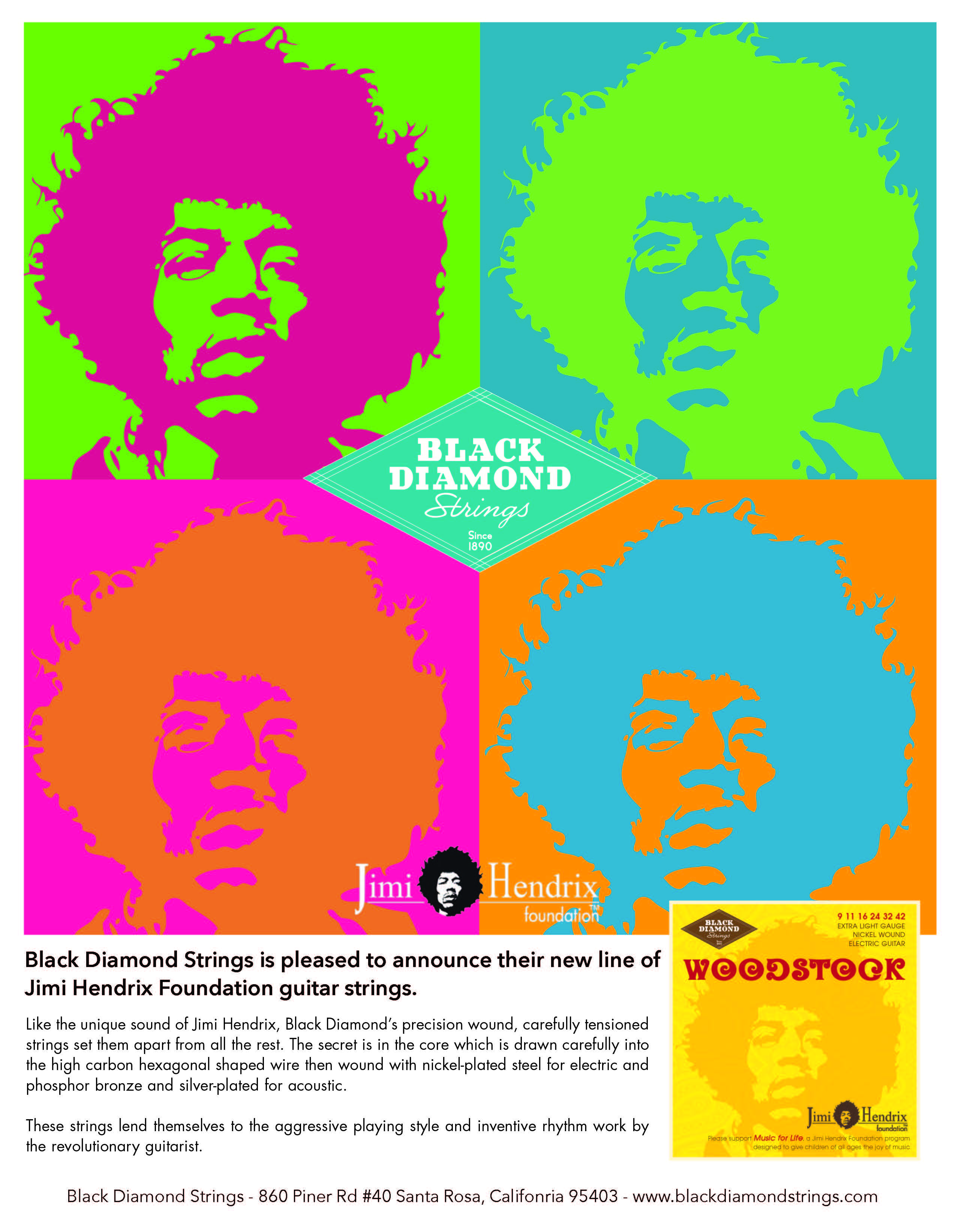 Jimi Hendrix’s legacy is one of expression, inspiration, and togetherness. To listen to Hendrix or watch live footage of his otherworldly talent, or to see him talk of hippy and new-age ideals, you get the sense that this was a guy who just wanted everyone to get along, be happy and to make beautiful art for each other. That’s one part of the story of the strings on review here. The other part is that back in the day, Jimi loved his Black Diamond strings, and that leads us to this new partnership between Black Diamond and the Jimi Hendrix Foundation’s Music For Life program.

The Music For Life program is part of the foundation’s work dedicated to the betterment of the world community through music. “In honor of the love and giving spirit of Jimi Hendrix, the foundation works to improve the quality of life for children and the world, and to inspire creativity in music, arts and sciences,” they proudly declare. They do this by providing children and young adults with musical instruments and instruction without the worry of cost, and the initiative is funded with help from collaborations like this Black Diamond project, and partnership with brands like Kalitta Motorsports.

The idea is definitely not to give the impression of “Jimi Hendrix signature gear” – these are not being marketed as “Jimi Hendrix strings” and therefore they’re not just for people trying to nail his sound. It’s really all about paying tribute to Hendrix’s spirit and paying it forward by:

a) bringing you some kickass strings to make music with, and

b) paying it forward by helping to fund instruments and music lessons for the next generation of musical geniuses.

So with that in mind, let’s look at what we have here: a line of electric and acoustic guitar strings named in tribute to various Hendrix performances, and each with cool packaging that captures the vibe of the time. So we have the Monterey Pop Festival set, silver plated for acoustic guitars, the Royal Albert Hall set, acoustic phosphor bronze and, of course, Woodstock – all nickel-wound electric guitar strings.

All three sets are available in extra light, light and medium gauges. One particularly nice touch is that each set’s packaging lists the setlist for the relevant show. There’s also a psychedelic, pop-art-inspired sticker included free with each set.

The strings themselves are great meat-and-potatoes strings. There’s nothing fancy in terms of coatings or super weird alien alloys – just great strings the way Black Diamond has been making them for decades. I popped a set on my ’62 Reissue Strat and had a good ‘ol wail, and at the time of writing, they’re still holding up after a solid week of jamming, recording and couch-noodling in various environments.

They’re a great no-fuss string, and you know that by buying a set, you’re also contributing to a very worthy cause that will help maintain Hendrix’s dream of a world brought together by music.